Acquiring the building for just £1, Lawrence was tasked with bringing the landmark structure into public use.

Here’s what the documentary uncovered whilst following Lawrence and his team around the building site in the days and months leading up to the hotel’s Grand Opening scheduled for April 28th, 2017.

Background of the Coal Exchange Building 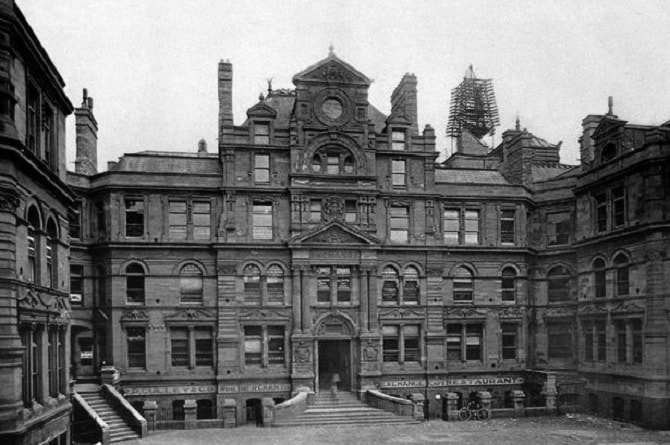 In 1883 the wealthy merchants and businessmen of Cardiff decided they needed a place to conduct their affairs.

Somewhere grand and befitting of the types of deals they were orchestrating.

We are of course talking about the time when Cardiff was at the epicentre of global coal trade.

Thus, the idea for the Coal Exchange was conceived, designed and created and when completed the building would become a stunning structure. One which remained a reminder to the surrounding area and local people of Cardiff’s great past.

After the demise of coal trading in Cardiff so too did the Coal Exchange building and in 1958 closed its doors for good. Following the closure, there were a stint of other occupiers even a few years when the building was used to host concerts played by the hottest bands of the time.

Due to safety issues concerning the structure of the building, it closed again and was derelict by the time Lawrence came upon it in 2016.

Bought for a pound in March 2016 Lawrence was facing a monumental task of restoring a building that he already knew would never sell for the amount it would cost to renovate.

Predicted costs to restore the Coal Exchange were in the region of £42 million, with a resale value when work was completed of just £35 million, Lawrence was knowingly making a £7 million loss.

Still after overcoming initial reservations of local MP’s and the public Lawrence was determined to make the Coal Exchange Great again.

The BBC documentary shines a light on the work needed to bring the building back into safe public use.

Facing unknown costs and challenges Lawrence and the team ploughed on.

By October 2016 the true scale of the project is realised when Lawrence and his site manager stare up into the cavernous rotting expanse of the building and state that “it’s no Da Vinci”. 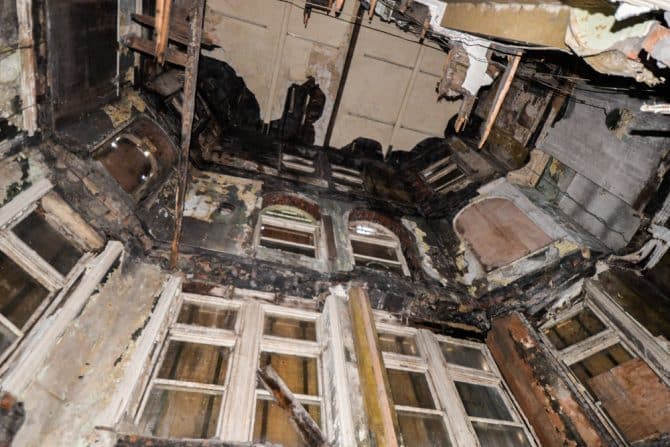 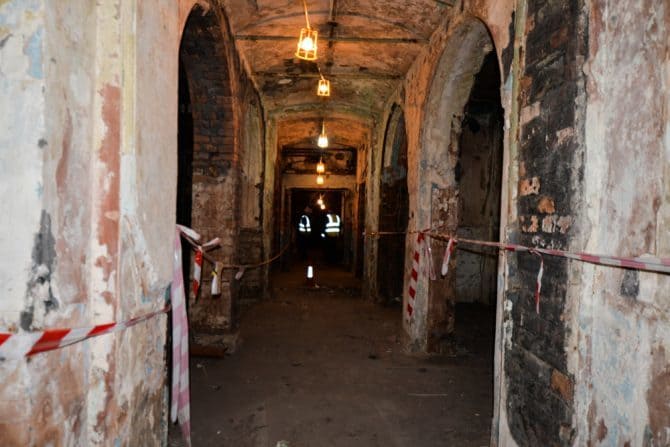 Still, like peeling an onion, the team revealed the beauty of the architecture removing layers of damp, 1,300 tonnes of debris to reveal stunning original features.

During the entire documentary, Lawrence can be seen driving the team along with a permanent smile on his face.

Looking past the building site towards the end goal; renovating and preserving the building that the local public has grown up admiring.

The risk involved in taking on a project like this is never without surprises but with no fear and determination, the rewards far outweigh the risk.

At the time of airing the restoration of the Coal Exchange was the largest heritage restoration project in Wales and perhaps the most highly publicised in recent times.

Due to the age of the building and level of degradation, there were a few challenges the team had to face.

The lack of lifts and narrow corridors meant it took a team of labourers to move just one wardrobe. 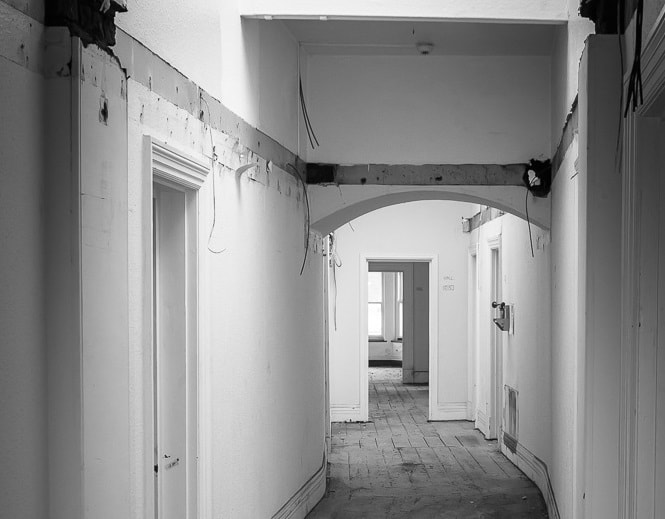 Also, being far away from the project Lawrence felt he had less control and impact than he’d had on similar projects in Liverpool such as 30 James Street and The Shankly Hotel.

Of course, Exchange Hotel was on a whole other level with regards to the condition of the building and the significance it held for the public.

Having never missed an open date since beginning his restoration work Lawrence worried about the deadline in Cardiff and the hits kept on coming.

By the 28th of April, due to building control regulations not being signed and having no gas supply the opening day was pushed back and for the first time, Lawrence had missed a date.

True to form however the team pushed on and made sure that by the newly scheduled opening date everything would be perfect for the arriving guests.

The main concern throughout the restoration has been maintaining the original glory of the building.

Local campaigners, Save the Coal Exchange, were concerned that because the building was being occupied by a business and Signature Living would not be concerned with the history they had in their hands.

Lawrence gave an open invitation for Save The Coal Exchange members to enter the site and keep tabs on the efforts going in to preserve the important features associated with the Coal Exchange. 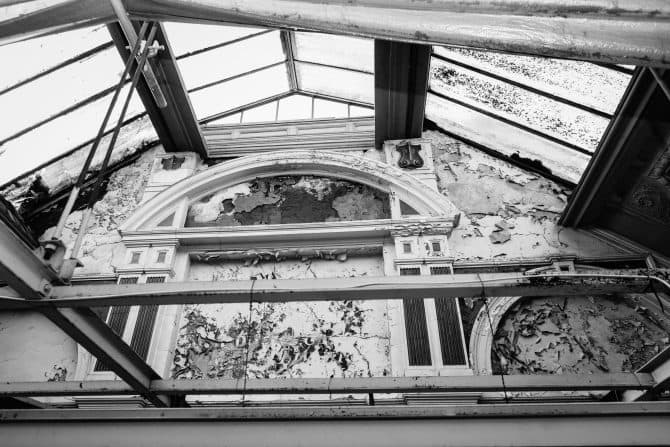 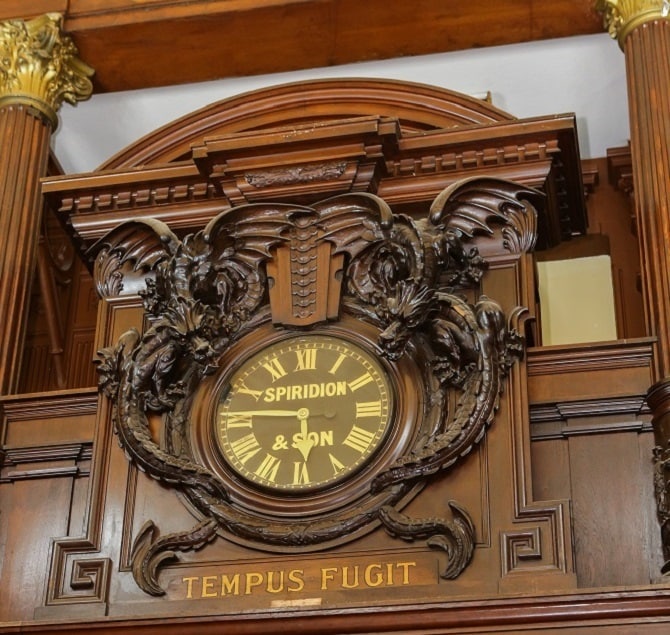 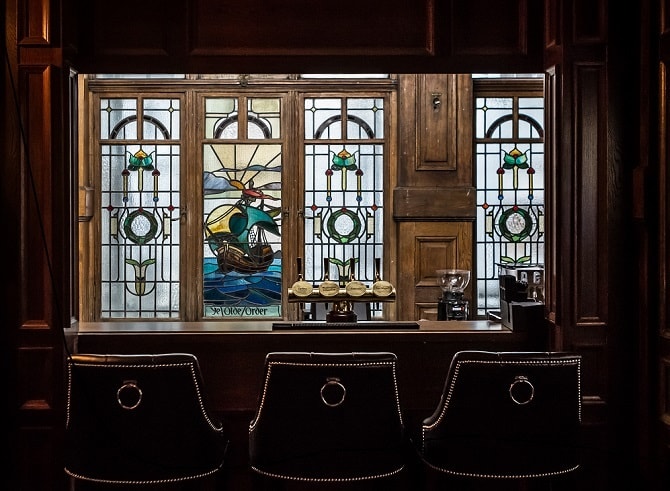 Stained glass windows, The Dragon Clock, The Lion Sculpture Barometers and original panelling have been saved where possible. With plans to fully restore the glass vaulted ceiling, all the aspects that made the building so striking in the past will still be intact for the public to enjoy in present day.

Protecting the original DNA of the building is what will make Exchange Hotel such a remarkable Cardiff accommodation as visitors can explore a part of Cardiff’s history that otherwise might have been lost.

A public open day was set for members of the local area, business and organisations could come along and see the progress of works being carried out. The idea was to show people where the project was heading and what type of hotel they could expect once finished.

People were also given an idea of the scale of work being carried out behind the brick walls and construction covers. Parts of the building under construction were left exposed so the public could glance up the entire height of the building and see the level of deterioration that had occurred, that was now being restored. 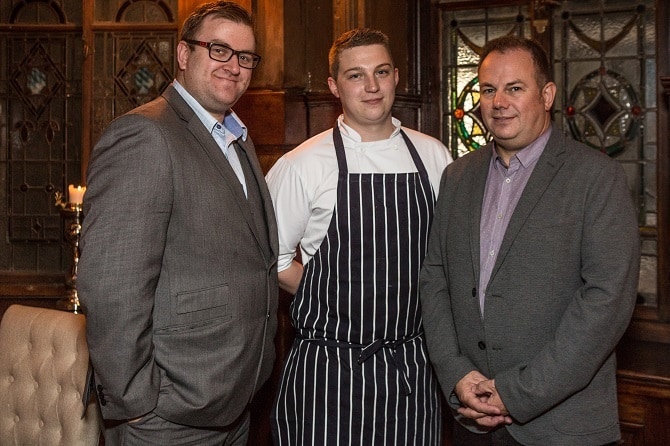 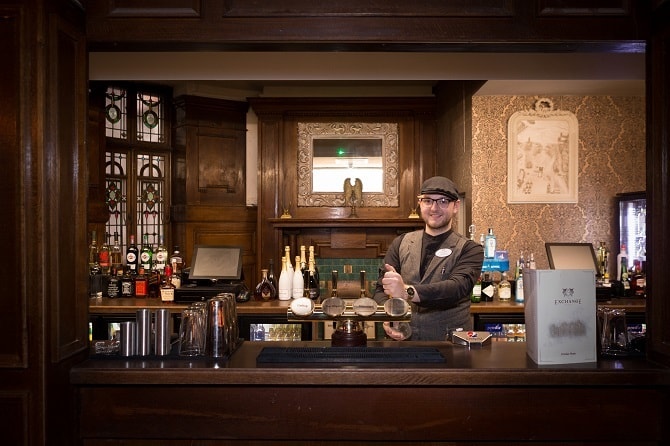 Representatives of Signature Living were on hand to answer questions and even to discuss future bookings for when the hotel open.

Set to be a top Cardiff wedding venue, our events co-coordinators even held a wedding open day to showcase the possibilities of holding a wedding service and dinner at the Exchange.

By June the Exchange Hotel is set to host guests attending the Champions League Final and the day before check-in, staff worked overnight to get everything ready for check in.

True to form the team worked until the last minute and Exchange Hotel was ready to accept guests into luxurious hotel rooms with unique and quirky features such as “find this artefact” tiles on the bathroom walls. 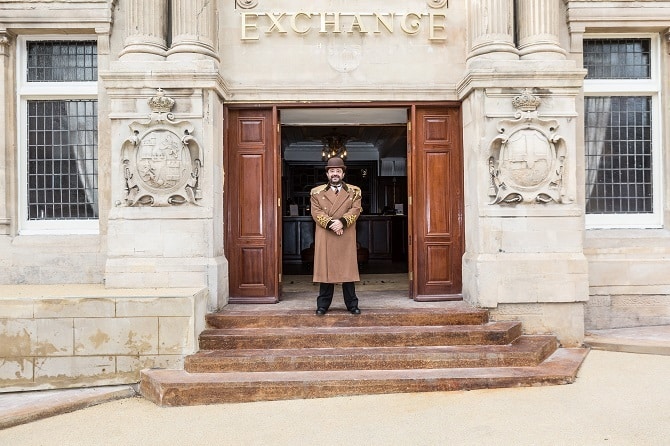 Even though there’s plenty more work to do, the front of the building looks better than it has for over 50 years.

After Champions League Final weekend work will continue through the week and the hotel will continue phased openings at the weekend.

In the future, Lawrence hopes to host a local art gallery within the basement of the building, Bute Town Arts and History Museum whose artefacts started as a local history project and became a full-scale arts centre. The group lost their funding in 2014 and have since been closed.

Working in partnership with Signature Living in the future work that once showed in the gallery will now find it’s home at Exchange Hotel. By late September guests will have another way in which to explore and learn more about Cardiff’s heritage and past.

The Old Bank that closed in 2006 is set to be the hotel restaurant, and underneath, in the labyrinth of vaults and corridors, plans for more hotel rooms and perhaps even a spa.

Signature Living will maximise every inch of space and bring stories of the past into the public’s present by researching the history of the bank and what was once stored in the many vaults.

By Spring 2018, 204 bedrooms will be finished, and the rest of the hotel will continue to receive guests from all over Britain and the world.

This project has brought a sense of pride to those who continue to work tirelessly to see it finished and will be an amazing boost for tourism in the area.

To get a full understanding of the project from start to present and see the work that has gone into restoring a piece of Cardiff’s past by bringing it into the present.

Get a full understanding of the project from start to present and see the work that has gone into restoring a piece of Cardiff’s past by bringing it into the present.