Last Tuesday, Signature Living celebrated our 10th birthday. And from starting out with just four apartments on Victoria Street to becoming a national hospitality provider with venues across Liverpool, Cardiff and Belfast, it’s certainly been a ride and a half!

Throughout these 10 years, Signature Living has achieved goals we could only dream about a decade ago, and in true Signature style we couldn’t let the opportunity pass without hosting a party to celebrate our success.

On the 14th August we sent some goodies out across our venues for all the staff who’ve helped us get to this landmark ocassion. From pizza and party poppers at Head Office, to balloons and bubbly at all the hotels, we’ve never had a day in the office quite like it! 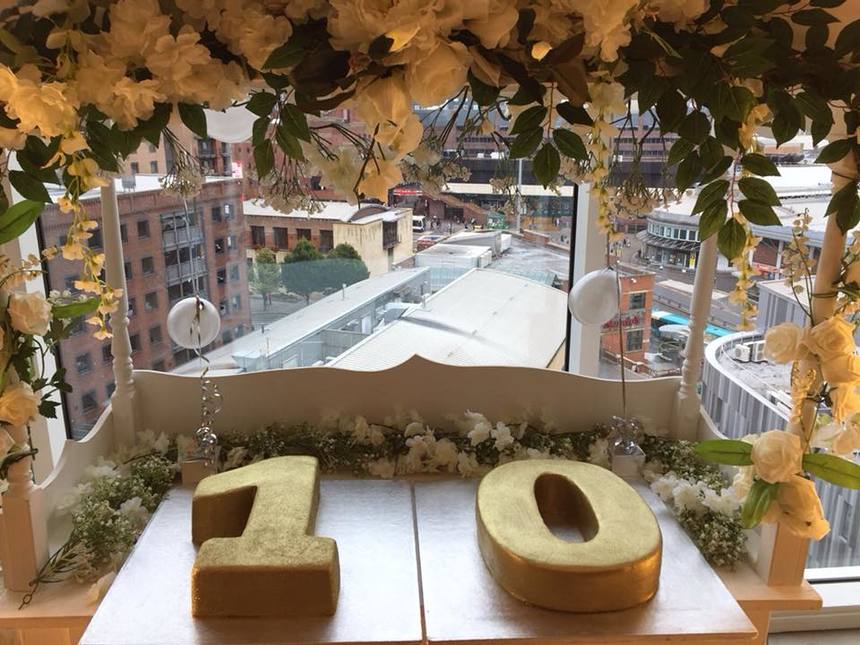 But the 10 year birthday of Signature Living isn’t all we’ve been celebrating – it’s also been a decade since owners Lawrence and Katie Kenwright tied the knot.

The happy couple celebrated their special day with Signature, enjoying a romantic, candle-lit dinner at the Carpathia restaurant, bringing together the two important anniversaries in their lives.

Lawrence and Katie also kicked off our year-long celebrations by announcing Signature Living’s biggest ever prize giveaway, worth over £150k! Each month, for 12 months, a new life-changing prize will be revealed on social media, offering all our followers the chance to make their dreams reality, from magical trips abroad to sizzling summer surprises with thrilling experiences and sparkling Signature occasions in-between!

Here are some of the best photos of the day…

Staff at Head Office in Kingsway House were treated to a pizza party at lunch time with Signature cupcakes and even some cheeky fizz in the afternoon! The office was decked out in celebratory decorations and our own Signature dancers paid a visit, bringing more sweet treats to enjoy. 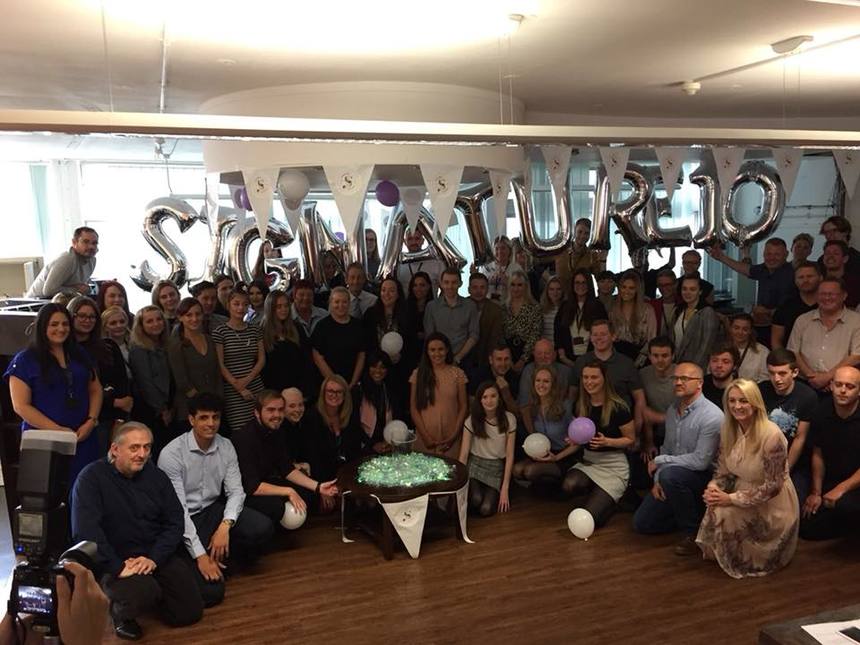 The whole team got together for celebratory photo, and a round of Happy Birthday complete with party poppers at the end. 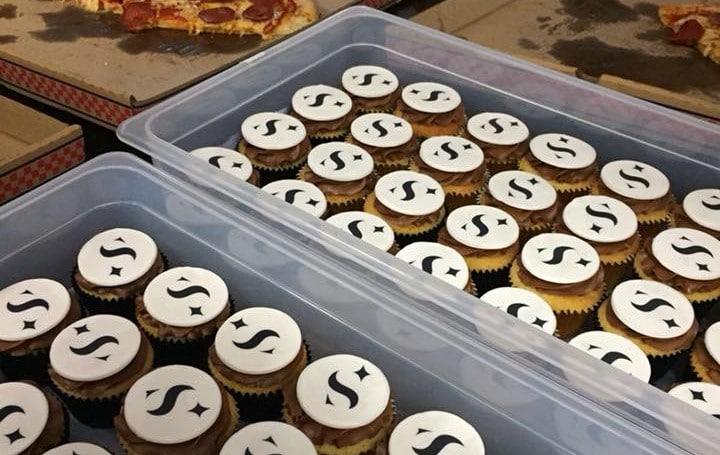 Signature cupcakes were on the menu, alongside plenty of pizza for a birthday lunch.

Katie and Lawrence Kenwright weren’t just celebrating 10 years of success with Signature Living on Tuesday – they were also celebrating 10 incredible years of marriage and a relationship that helped to build the company into what it is today.

And what better than to combine the two anniversaries with a romantic, candle-lit dinner for two at the Carpathia Restaurant in 30 James Street?

After starting the party at the Garden of Eden with Shankly staff (and a fabulous celebratory cake), Katie and Lawrence enjoyed a spectacular dinner in the private dining room of the Carpathia Restaurant.

Our lovely staff made sure it would be a night they’d never forget, decorating the room with romantic white roses, plenty of petals, a violinist playing just for Katie and Lawrence and even a beautiful speech by Managing Director Sue Wright on behalf of all of Signature’s staff.

Over at Alma de Cuba, Signature’s youngest nightlife venue, they celebrated on Tuesday with a classic fiesta-style flourish, including some Signature Living balloons and even a sneaky bit of celebratory bubbly! 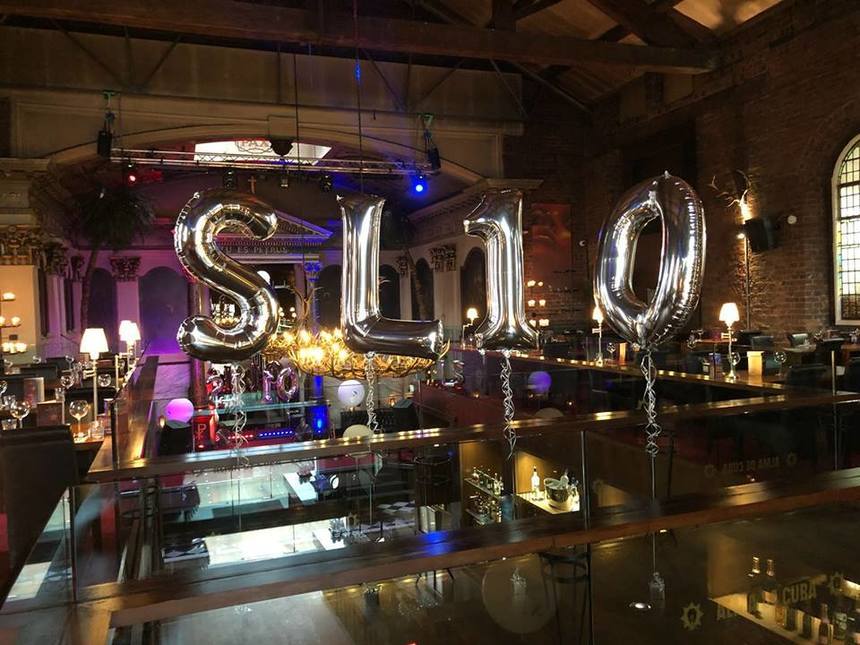 Signature took over Alma de Cuba, the Cuban-influenced nightclub and restaurant on Seel Street in December 2016, cultivating the incredible brand the venue already had but adding some magical Signature touches.

All our wonderful staff at Arthouse had a celebratory toast to Signature’s 10 years. Liverpool’s only movie-themed hotel opened in late 2016 and has had an incredible two years of success. 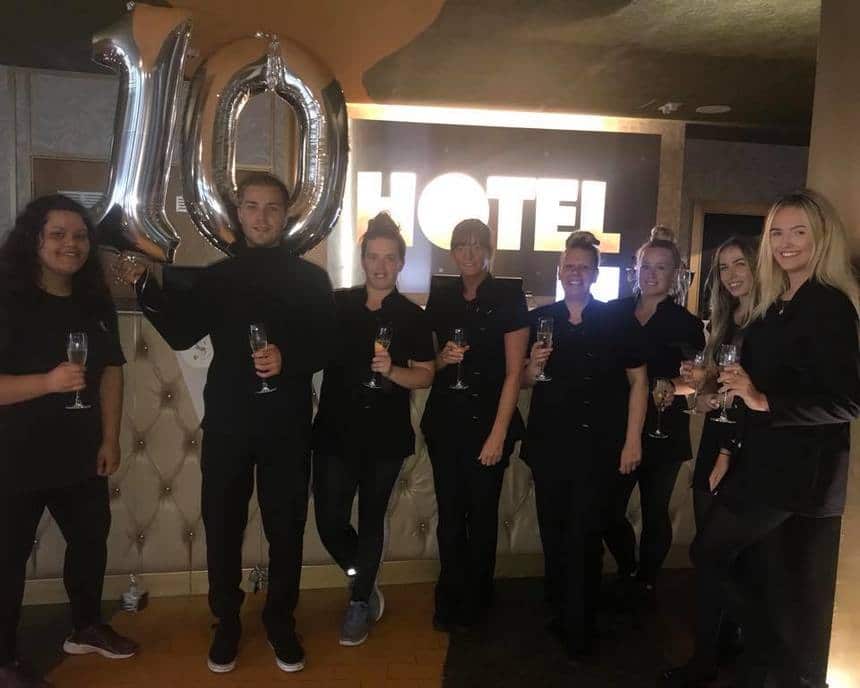 From the glamourous, celebrity-filled launch of the Arthouse bar (now Mullholland) to the spectacular opening of the penthouse Skyline suites, they’ve got plenty to celebrate after a fantastic few years.

Down on the waterfront at 30 James Street, they also got into the party mood. Our concierge Tom posed for a celebratory  photo in the beautiful entrance way to the waterfront hotel. 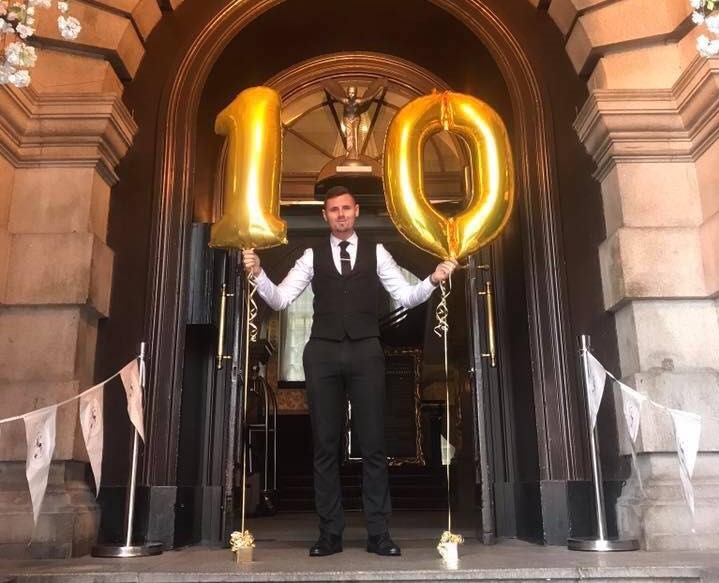 After the success of their party formula, Lawrence and Katie were looking for a bigger, more daring project when their eyse fell on Albion House at 30 James Street. The abandoned and derelict property had stood unused at the centre of Liverpool for nearly 30 years.

But fueled by a desire to save the Grade II* listed building and preserve its rich heritage, the Kenwrights created a Titanic-themed hotel that respectfully preserved the memory of the vessel, the passengers, crew and its tragic history while offering luxurious and opulent accommodation. In 2018, the spectacular hotel was named the best hotel in the UK by Travel Republic Awards – something that’s worth a celebration!

At The Shankly Hotel on Victoria Street, Eric and his girls decked out the reception in some birthday finery, giving guests a celebratory welcome to Liverpool’s legendary football hotel. 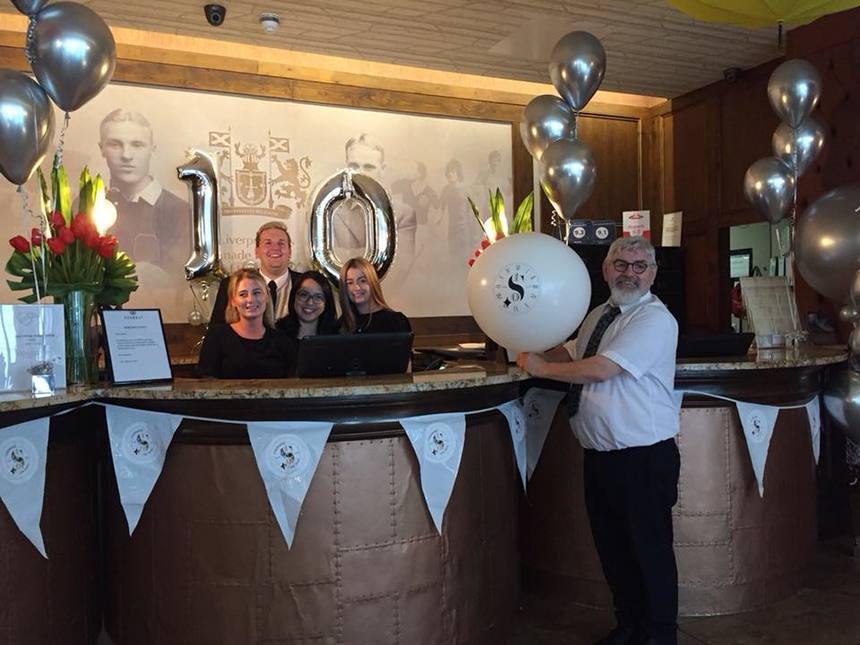 The Shankly Hotel showcases the best bits of all that Signature Living strives to achieve: exemplary customer service, incredible group accommodation and beautifully preserved heritage. The hotel opened in 2015, paying tribute to one of Liverpool’s most legendary footballing men and celebrating the highlight of all Liverpool’s culture.

Meanwhile, the team at Signature Living Hotel, on Mathew Street, enjoyed some fizz at the venue where it all began a decade ago. This was the first hotel Lawrence and Katie opened after the success of their apartments and, as all the staff will tell you, it’s still the best party hotel in the city! 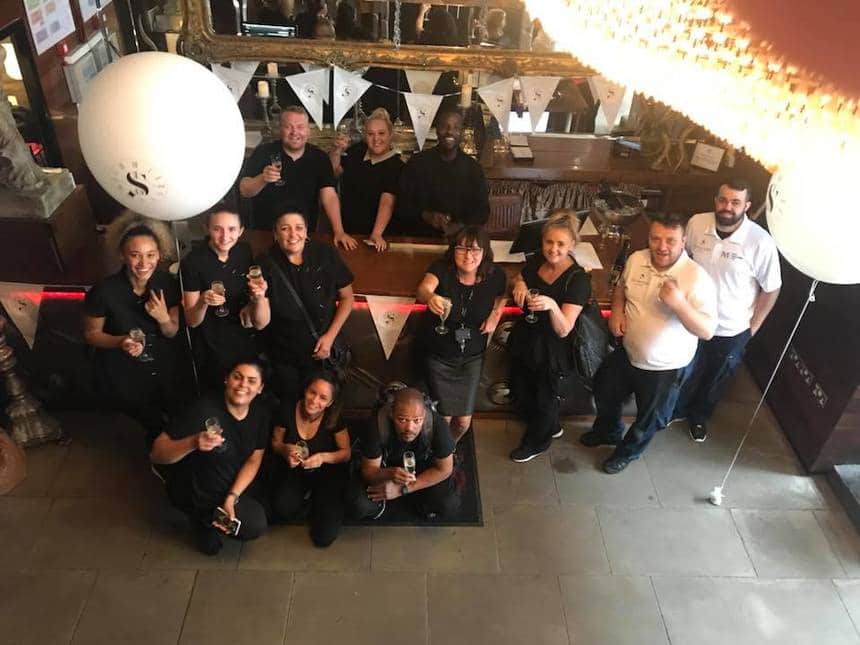 The Signature Living Hotel was the first time that the company made its mark on group hospitality, disrupting everything people knew about party accommodation.

Since then, it’s grown from strength to strength and our themed rooms, including The Bond Duplex, The Sex & The City Floor and The Hangover Suite are still some of our most popular hen and stage-do rooms!

Our Biggest Giveaway Ever 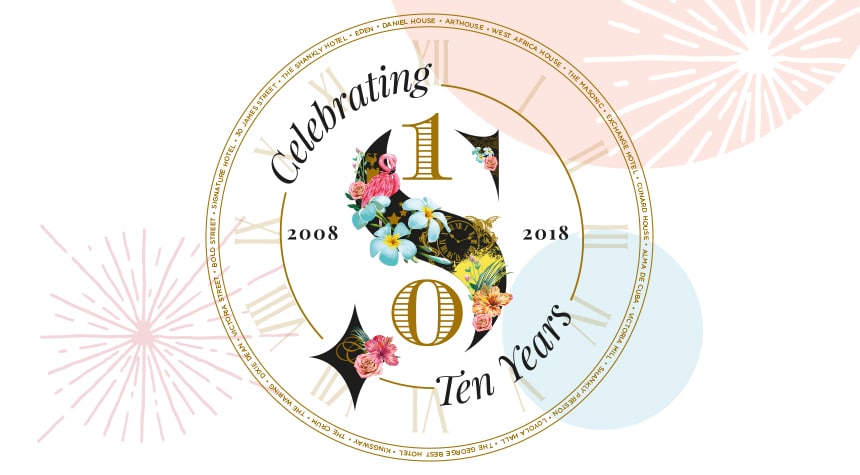 We’ve celebrated our anniversary – now it’s your chance to be part of Signature’s success. You’ve been with us for our biggest moments and we want to make your special occasions as big and as spectacular as our own!

To celebrate Signature’s 10th birthday, we will be giving away incredible prizes each month for 12 months. For more information visit our website biggestevergiveaway.com . Make sure you’re following us on social media where we’ll be posting how to get your hands on all the life-changing prizes and jaw-dropping surprises on offer. We can’t wait to celebrate with you!