If you love a carnival atmosphere, Brazilica festival is the one for you.

Bringing an injection of vivid colour and party spirit to the streets of Liverpool, this festival celebrates the best of Brazilian arts, music and culture, with a range of artists from the UK, Europe and Brazil.

Latin American rhythms and samba sounds will fill the streets for the tenth consecutive year, as Brazilica promises to be the biggest and most vibrant show yet.

At Signature Living we love a good party, so we’ve put together a handy guide of what’s on and the best places to stay during this fantastic weekend.

This unique festival features over 800 performers over three days, with this year promising to be the biggest one yet.

The Crowning of the Carnival Queen

The festival is kicked off on Friday evening when samba dancers from across the UK will compete to be crowned the Brazilica Carnival Queen 2017. The dancers will perform in front of a panel of judges, headed by presenter and writer Ellie Phillips.

This fabulous free event will take place in PANAM on the Albert Dock and starts at 8pm.

With a special guest appearance from singer/song writer Aleh Ferreira and live performances from the Liverpool Samba School Band, it’s set to be a special evening. 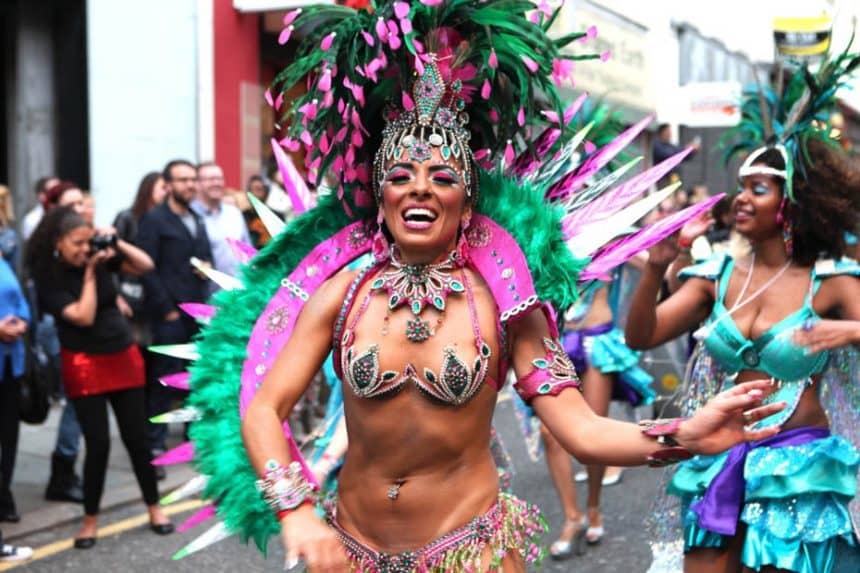 Expect an evening of sparkle, Brazilian drums and fabulous dancers, with an amazing samba drumming finale from the Liverpool Samba School band.

One of the highlights of the festival will be the Brazilica main stage programme, which will take over the Pier Head village with a vibrant feast of music.

The Pier Head will be brought to life with a colourful celebration of the sights, sounds and tastes of Brazilian culture.

Highlights include performances from 10-piece Brazilian Afrobeat band Bixiga 70, who are from São Paulo.

Along with Afrosamba, a UK based band paying homage to the great names of afro-brazilian jazz, samba and bossa nova, plus Rio born Aleh Ferreira and many more.

There will also be a Brazilian marketplace, so you can sample food and drink from across the world.

When: 8pm on Saturday 15th July

On Saturday night, the spectacular night time carnival parade takes over the streets of Liverpool and remains the real highlight of the festival.

Led by the carnival queen, the parade features over 800 performers with vivid, feathered costumes, floats and a showcase of samba bands from across the UK and overseas.

Thousands of people are expected to line the route, which makes its way from Abercromby Square through the city centre via Oxford Street and past Liverpool Metropolitan Cathedral.

Before travelling down Hope Street, Hardman Street and on to Bold Street, before concluding in Williamson Square.

The samba party will continue until the early hours with the official Brazilica After Party taking place at Camp and Furnace in the Baltic Triangle.

Entry is £5 per person and the event will feature carnival DJ’s and live music.

When: Various dates in July

The Brazilian Film Festival is also returning for a third year, showing a host of documentaries and dramas from across the country and screened at locations throughout Liverpool.

Some of the highlights include FACT’s showing of the multi-award winner for Best Fiction feature, Nise: The Heart of Madness and Unit 51’s screening of Jonas, a drama set in the visually spectacular backdrop of Brazil’s Sao Paolo at carnival time.

Finally, the Fringe Festival is packed with films, exhibitions, performances and workshops taking place across the city.

One of the highlights is DJ Ranga and DJ Rogerconga performing at Keith’s Wine Bar on Thursday 13th July, 6pm until midnight.

If after a full day of samba action, you still haven’t had your fill, get down to the famous restaurant and nightclub, Alma de Cuba and keep the carnival going.

Alma de Cuba is renowned for its fusion of Cuban, Hispanic and Latin American influences, creating a carnival style atmosphere that rivals Brazilica. 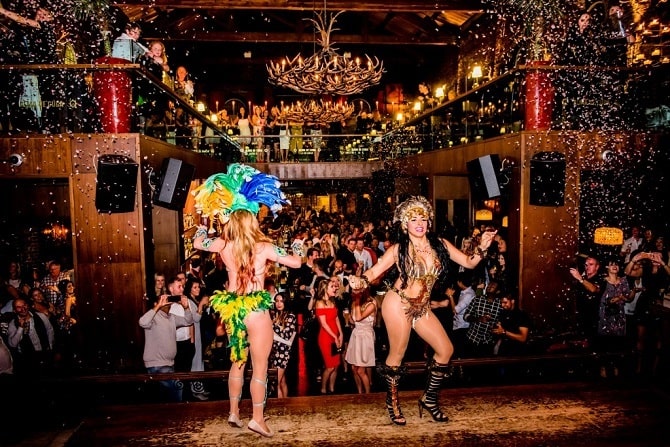 This beautiful former church is the perfect place to carry on the party, whether it’s before or after the parade, Alma always has brilliant Cuban and Brazilian themed events to keep you and your friends entertained.

Every Friday and Saturday night from 11pm, witness the carnival atmosphere with sensational Samba dancers, resident DJs playing the best mix of music from across the globe and a spectacular petal show.

Or if you fancy a warm up to the festival, get down to Alma’s Samba afternoon tea and shake your tail feather.

Undoubtedly Liverpool’s most vivid and vibrant nightlife venue, Alma de Cuba is the best place to start or end your Brazilica experience.

Where to Stay for Brazilica

For Brazilica 2017, why not treat yourself to a luxurious stay at one of Signature Living’s colourful apartments and really make the most of the weekend of vibrant celebrations.

Ideal group accommodation for Brazilica festival, our spacious suites are perfect for enjoying a few drinks before you head out to enjoy the carnival atmosphere.

And of course, after a long day of dancing, you can enjoy some relaxation and TLC as you sink into one of our fantastic whirlpool baths that come with each suite.

Our stunning rooms come with kitchenettes and are in a range of different themes including tropical, nature, wonderland and special suites that can accommodate large groups, so you don’t have to split up from your friends. 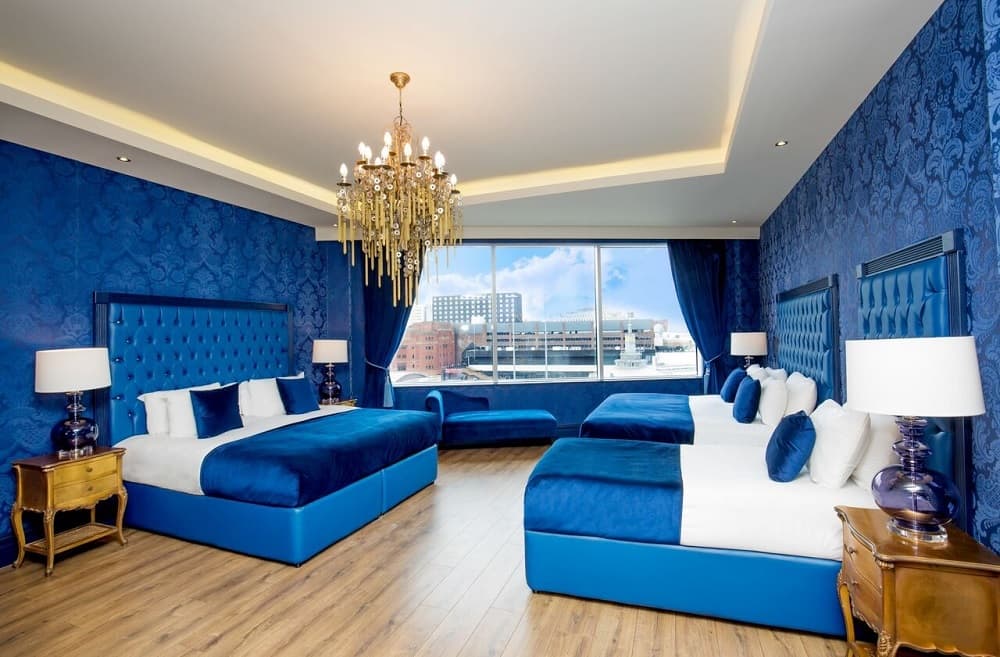 The Garden of Eden suites

These brand new colourful suites are situated within the Shankly Hotel in the centre of Liverpool.

Keeping to the ancient theme taken from the bible, we have created affluent accommodation like you’ve never seen before.

Complete with beautiful botanic features, crushed velvet furniture and vivid neon signs that are perfect for any eye-catching selfie. 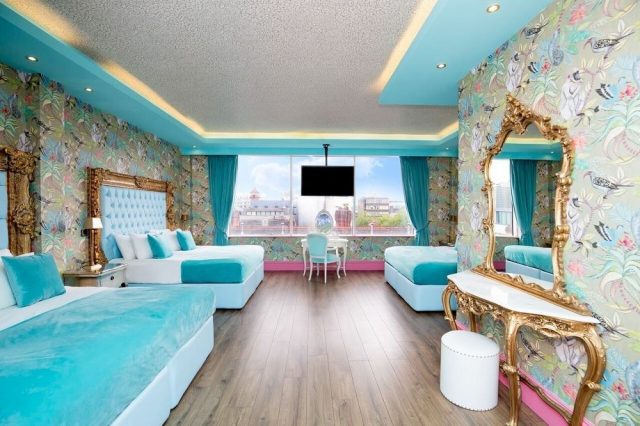 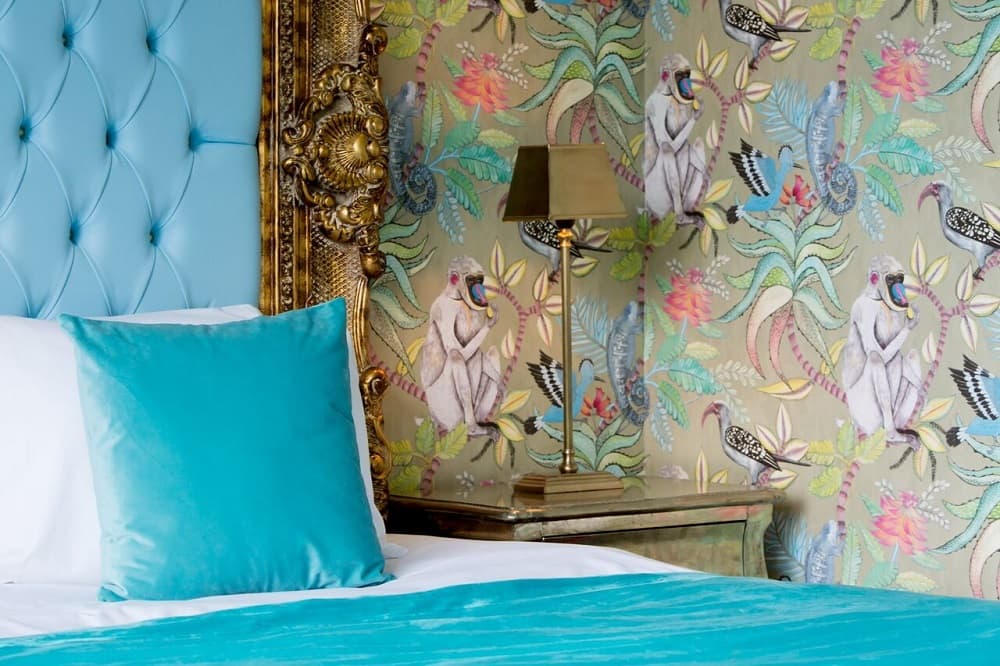 The suites range from the Adam and Eve themed rooms, to the blossoming Nature suite and of course The Garden of Eden.

These luxurious apartments are set to be the most popular destination for group accommodation in the city and are not to be missed. 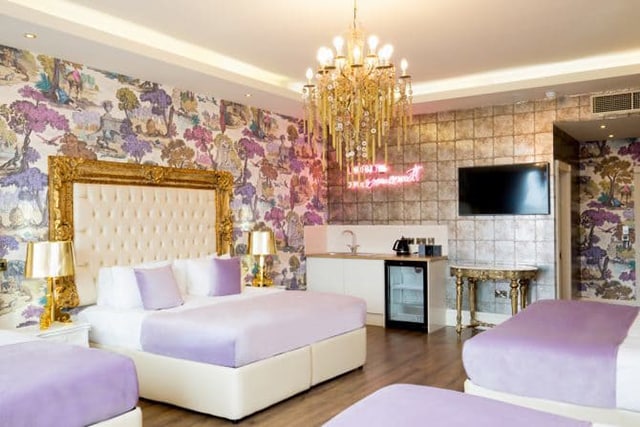 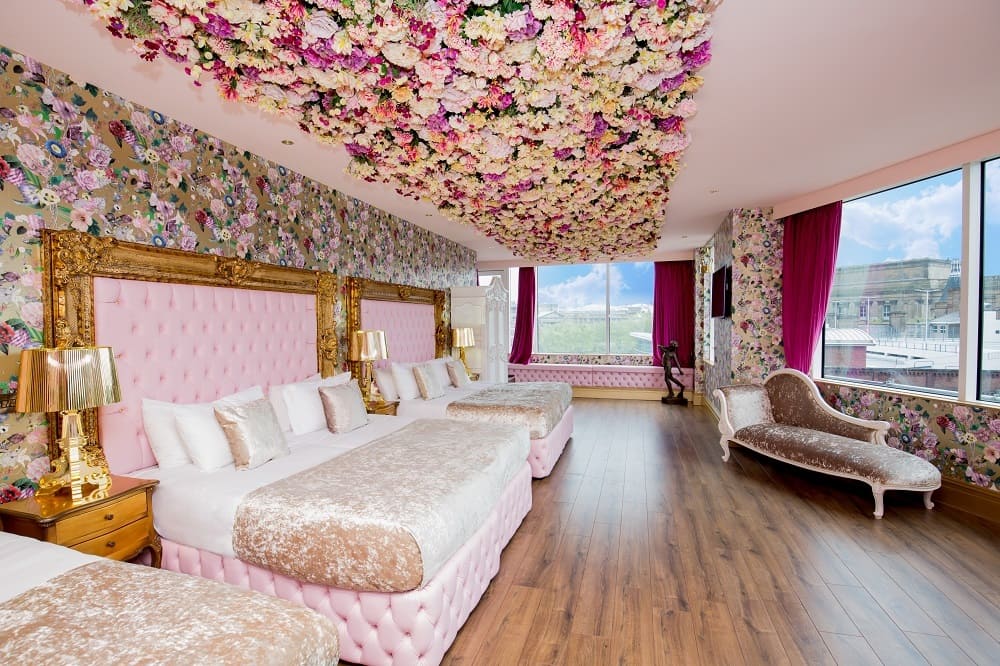 Or stay in Wonderland, also located in the award winning Shankly Hotel, and go down the rabbit hole into a whole new world for an unforgettable city centre break.

These stunning suites are lavish and opulent, featuring gold interiors with no expense spared.

Perfect for resting your head after a long day of samba dancing, Wonderland is the most unique hotel experience in Liverpool. 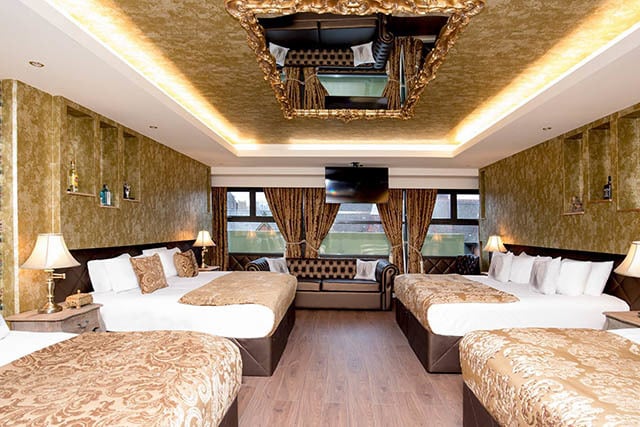 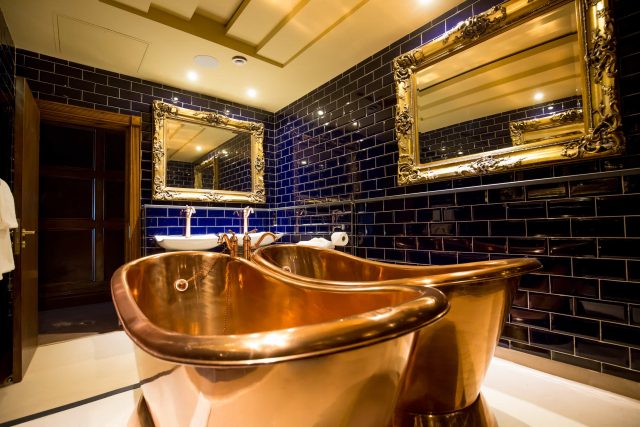 Last but not least, Signature Living provide amazing apartments that are perfect for group accommodation.

The Sanctum Party floor can sleep up to 26 guests and is the ultimate venue for a Brazilica weekend.

Or check out Morgan’s Vault, which features private access to a luxurious spa, so you and your friends can get pampered before and after the festival. 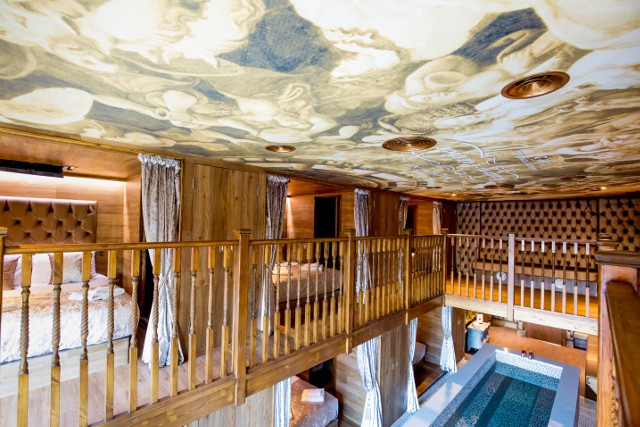 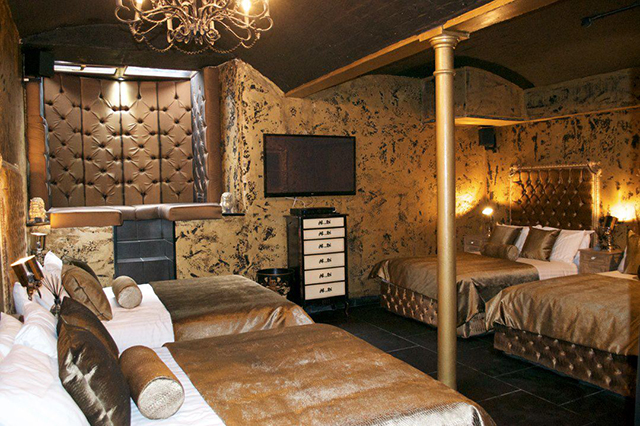 Brazilica Carnival is the largest U.K samba carnival event and has become an exciting part of Liverpool’s annual events, drawing over 60,000 to the city.

So, if you really want to get a taste for Brazil without having to board a plane, this festival is one you can’t miss.

To book your stay with Signature Living and really make the most of this fantastic festival, get in touch with one of our team today.

What to Expect from the British Style Collective 2017

Get a Taste of the Celebrity Lifestyle with Signature Living